For a few years, I had an Oregon Scientific projection clock that rocked my night world.  It put the time up on the ceiling in red, the alarm went off when it was supposed to, and it just  worked.

So of course, I bought a replacement.

I was at Bed, Bath & Beyond shopping for, fuck, I don’t know.  It’s one of those stores where you go in for a shower curtain and come out with $150 in gadgets, then have to go back to get the shower curtain you forgot to find.  Anyways, I see this clock sitting there on this stand looking all blue and shit, and I immediately notice the following awesome things about it:

Holy crap, this thing is awesome.  Best of all, it’s RIGHT THERE.  No eBay, no online purchase, no waiting two damn days to get it (while I click the refresh button on the UPS web page, c’mon damnit, get here already!), it’s RIGHT THERE.

I buy the FUCK out of it.

It’s the Homedic S5-5000 At home, I tear open the box and pull it out.  A few minutes later, I’ve got the timezone set, the temperature probe is powered up and mounted outside, the clock is set for wake up time, and OH NEAT THE CLOCK IS SETTING ITSELF.  This is the best clock ever!  I dismissively toss my old Oregon Scientific clock to the side.  “Sorry, old chum, but that was the future on the phone, and it says it’s here”.

I tell this Awesome Machine to wake me up with soothing jungle noises, and that night, I shut off my bedside lamp and get ready to go to slee-  wait…  what’s that?  The entire room is bathed in a blue light.  I look up and see, projected onto the ceiling that is is 10:36 – 56°.

The blue light is so bright, the entire room is illuminated.  I can see the bookshelves, the walls, the paintings on the walls…  Hang on…  I grab a book, open it, and discover that I can read the text.  This is not great.

“No problem”, I tell myself, “a fine company like Homedics must have a brightness control on their quality products”.  I hunt around for a minute, then give up.  I’ll fix this tomorrow, I decide to turn off the projector.   As it turns out, this requires I turn the light on and fumble around for a tiny switch on the back of the clock, but no bother, this is fine.  Projector disabled, the light goes off, and I settle down to slee-  uh…  I can still see illumination through my eyelids.  I look over at the clock and realize that the backlighting for the face is actually WHITE.

So, this clock is basically cornering the market in retarded color choices for night vision.  Blue to burn out your retinas, and white to kill off any Rhodopsin left after the first attack.

I figure out how to shut that off and shuffle off to sleep.  Well, I’m actually getting less performance now than I had before because at least my Oregon Scientific clock could show me the time, but….  no problem, I’ll get this taken care of tomorrow.

Slowly, I shuffle off to sleep…

I gradually come awake.  I’m rested!  I feel great!  I stretch out, this is fantastic.  I glance over at the clock, but, oh right, I had to turn off the backlighting.  No problem, I must have beaten the alarm.  I frown.  I have beaten the alarm, right?  I grab my phone and check the time…  oh monkey trumpets, I’m an hour late.  The alarm didn’t go off!

I rush off to work, promising to debug the issue when I get home.  Later, I return and sit down with the clock and the manual.  I’ve never had to use a manual with a clock before, but ok, it’s a brave new world.  Paging through it, I discover some disturbing things.  Obviously, I had assumed there would be a dimmer or brightness control.  This, as it turns out, is wildly incorrect.  As best as I can tell, there is a ‘hypermatter singularity’ at the core of this clock that’s used specifically to provide the light for this projector.

Additionally, the backlighting on the face of the clock is equally non-adjustable.  Awesome.  Now, let’s figure out what happened with the alarm…  this is when my wife contributes to the discussion.  As it turns out, the alarm went off after I had left for work.  The clock had spontaneously decided it was in a different time zone and had set itself for a later time.  A fluke, I’m sure.

Sighing, I decide to give it another try.  The projection clock is still really what I’m wanting out of this, so it’s time to use a little cleverness.  I have some sunglass lenses handy, so I tape a couple together and balance them atop the projector aperature.  This works, sort of, but there’s still blue leaking out around the edges and the numbers can now only be pointed straight upwards, but ok, it’s a slight improvement.  I reset the time on the clock, and write off the backlighting.  WHITE!  C’mon….

I snap awake, the alarm is sounding.  This is good!  It’s going off, and it’s obviously not late because it’s still dark out.  Blearily, I hit a button, and it shuts off.  Boy, I am tired.  Exhausted, even.  I yawn, try to stretch, but geez, I am beat.  Blearily, I sit up in bed and stretch again.  I grab my phone to use as a flashlight and wander to the bathroom.  I’m checking email while waiting for the shower to heat up when I notice the clock on the phone.  It reports that it’s 2:03 AM.  wut.

Somehow, the clock has now shifted in the other direction and three hours early.  Oh sweet zombie Jesus.  I end up setting my phone as an alarm and finally make it back to sleep, but this is a rough day at work, and I’m tired.

That night, I read through the manual more and figure that somehow, it must have lost the timezone setting, so I reset that again.  As I noted earlier, the clock uses an atomic clock broadcast to set itself, but unlike most appliances, it seems to get bored.  This time, I turn off the atomic clock sync and just set it.  “No”, I shake my finger at it, “you do not set yourself”.

Since then, it’s semi-randomly changed what time it is despite me turning off that feature. Also, consider not using the ‘Rain shower’ sound as your alarm if it has been/is currently raining.  It’s less effective than you might imagine. The weather sensor can’t reliably reach it with updates even though it’s less than 10 feet away.

In short, this is the clock from hell.   My friends and co-workers have noted that my iPhone would function quite adequately as an alarm.  “Never!” I rejoin, “I’m not giving up yet.  If I use my phone as my alarm, then this Homedics clock will have won”.

“Dude”, one of them responded sympathetically, “it’s already won”.

Considering how many times I’ve been clockblocked by this abomination, I cannot recommend this alarm to anybody but my enemies, but for them I wholeheartedly endorse it.

Do you know what happened when you turned in a car as part of this process?  The dealers put two quarts of sodium silicate into the engine and ran it until it destroyed itself. 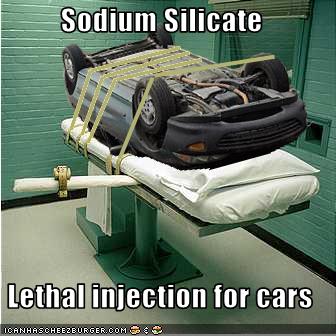 If you’re not disgusted with this program and all the money it cost you, then you’re a fucking retard.

This entire program was based on the broken window fallacy of economics.  It took money out of your pocket and made you think you got cash, but everyone who pays taxes was robbed.  The only people who liked this are the auto companies.  Why wouldn’t they like it?

It was another bailout, and you paid for it, suckers.