The time after The Phantom Menace came out was a period of civil war.  Fandom was divided along (admittedly lopsided) lines:  “Episode I was a disappointment” versus “Let’s hold out hope, they might be building to something big” optimism.  I found myself in the second camp because the only alternative was to believe that George Lucas had utterly shit the bed and the movies we had waited for since childhood were going to be just…  just terrible.  Trying to find a way from TPM to Episode IV (aka Star Wars) that redeemed what seemed to be terrible ‘mistakes’ was difficult, but I had a theory about the biggest, most visible piece of evidence that the franchise had lost its way:  Jar Jar. 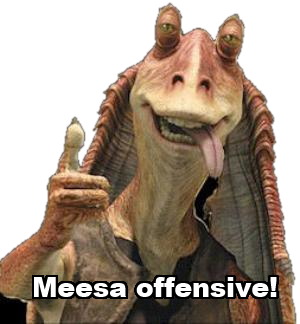 Jar Jar was presented as such an over-the-top ‘innocent’ character that it seemed Lucas MUST be setting us up for a huge mind-fuck, and I knew what it was:  He was going to be the big finale for Anakin’s conversion to the dark side.  The audience would be bound up inside with both happiness to see such a reviled character destroyed AND discomfort at the realization that they not only were cheering the Dark Side, but might even empathize with that darkness.  It would have been a turning point for not just the characters, but the fans themselves too; one that would force them to question their own beliefs and assumptions about good and evil.

For Anakin to make his final conversion, he would have to do something symbolic of killing his innocence and Jar Jar would be the symbol for that.  To make things even worse, though, he doesn’t just kill him: he maims him.  I imagined this happening in the second or third film.  Perhaps Jar Jar witnesses something and Anakin has to choose between doing the right thing by facing consequences or embracing the fear Yoda criticized in Episode One and us seeing that fear drive him to, as Yoda predicted, darkness.   He cuts off Jar Jar’s eye stalks, he burns Jar Jar, he mutilates him.  We see him do to Jar Jar what we know Obi-Wan will eventually do to him.  It’s foreshadowing and sets up the scale that needs to be balanced.

What should have happened…

In Episode III, Senator (or perhaps by this time he would be closer to Emperor, I figured) Palpatine visits him in the Space Hospital.  As we saw, Palpatine is a connoisseur of fine things, among them art.  In his role of benefactor and friend, he speaks to Jar Jar’s heavily bandaged body.

“My good friend Jar Jar”, he begins, “I am deeply shocked at this terrible turn of events and wish to help you in any way I can.”  The body shifts and the mouth tries to work, but Jar Jar’s lungs and throat have been burned and what emerges is a rasp.  “Senator…”

Palpatine shakes his head sadly.  “Please, do not speak.  You must heal.  Just listen, I have something that may help you secure a future.  We have placed you here under an assumed name to protect you.  You are Jar Jar F’et.  Believe it or not, that’s enough to fool our enemies.”

“Please, just listen.  After the terrible invasion of our home planet, the threat of droid armies was well established.  Jar Jar, I don’t need to tell you this, of course, you saw your friends slaughtered by these mechanical machines.  I have…  friends…  who have been working to bridge that terrible gap between machinery and man, to bring the power of the droid soldiers to the individuals.  You have heard of the Mandalorians?  Wait, please don’t speak.  I imagine you have heard of these legendary fighters.  They long ago built armored suits that made them stronger and gave them extra abilities.  We have been working together to create a new generation of these suits to be used in conjunction with a ‘clone army’ of sorts that could equalize the playing field between us and those who would use machines against us as the Trade Federation did.”  He shifts in his seat, a look of concern furrowing deep lines in his face.

“Jar Jar…  I have, in my possession, a set of of this Mandalorian armor.   It has been delivered here to your room and sits waiting in the corner.  Jar Jar Binks, I must confess that you have not always received the respect to which you were entitled and this troubles me greatly.  I wish for you to have this.  Please, don’t try to sit up.  My surgeons will assist you with this when you are able.  There is, you see, something the suit can do for you were you to wear it.”

“As I mentioned, the Mandalorian armor provides augmented strength, sensory information,  and more.  With our medical knowledge, I believe this suit can give you the ability to see again.  To see, to move, to walk once more.  And Jar Jar, your strength in this time of darkness will also gain you the respect you desire.”

“I warn you, however”, he says, standing up, “that the universe that you will see will not be the same one you previously knew.  Having felt such deep treachery by your friend…  the universe will look quite a bit darker.  But you WILL see it, and the life you live will no longer be at the convenience of others.  With this power, never again will you be made the fool to another’s bidding.  You have been preyed upon by those close to you.  To survive, you must no longer be that prey, but can instead be the hunter.”

Stopping at the door, he purses his lips.   “Jar Jar, this is a terrible thing that was done to you, but I urge you to consider my offer.  From one Nabooian to another, please consider it carefully.  If you’re suspicious, then I’m afraid you’ve begun to grow into this new universe I told you of.  You are of Naboo and influential and while I attach no conditions to this gift, I must admit that you are…   no use to me dead.  I would prefer my allies alive and strong and my friends close.  Choose, my friend, and be well.  I will await your response.”

Jar Jar’s bandaged body shudders, weeping, but of course there are no tears.  His eye stalks are gone and the stumps cauterized by that light saber attack, but still, his head turns slowly to the corner where he knows the Mandalorian armor stands.  If he is to do this, he must shed his past and embrace a new identity.  Despite what his friend has said, Jar Jar Binks died in that terrible attack.  Reaching back through his memory of Gungan historical figures, he is drawn to that of a famed hunter of ancient stories, Boba.  If he does this, he will take this name and combine it with his fake ‘Jar Jar F’et’ identity.  He will be Boba F’et, and he will no longer be the hunted.

He would become the hunter.