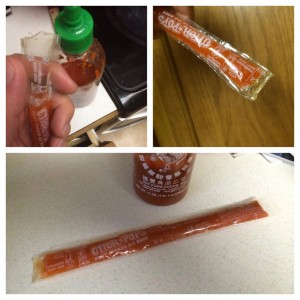 So, a few days ago I was eating an Otter Pop because, you know, Summer. Well, Summerish. Is it Summer yet? I haven’t taken measurements with my sextant yet so I’ve got to rely on what the MASS MEDIA tells me about the Equinox or Solstice and… no, stay off the conspiracy websites me, they’re not good for you. Anyway, I was eating an Otter Pop which as you may know is a plastic sleeve filled with sugar water that you freeze. They come in exciting flavors like ‘Blue’, ‘Green’, and, (as featured on the cover of this month’s Cordon Bleu Magazine) ‘Red’ and you eat them by cutting (or gnawing) off the end then squeezing the icy mess down your gullet.

I had just finished delicately consuming (read: ‘like a duck, no time for swallowing just spastically gulping’) one of these when inspiration struck. I had used scissors so the pouch had a clean cut at the end and now I had a cunning plan.

After thoroughly cleaning it, I got to work on refilling the sleeve. Using a mixture of three parts Sriracha to one part water, I filled it then fired up the stove. With a little experimentation, I figured out how to melt the end so that the new contents wouldn’t drip out and flash to steam while the plastic flowed. The last part was important because every time a droplet of Sriracha Juice flashed to steam, it basically maced me with the pepper vapors. That wasn’t great, but squinting through tear-gassed eyes, I persisted.

Finally, I had a satisfactory seal on the tube. Holding it up, I could see that it wasn’t perfect, but perfect is the enemy of the good enough and this was good enough. I kneaded it a few times to make sure the mix was uniform, shook it for good measure after making sure it wasn’t going to spray Sriracha all over the kitchen, then popped it into the freezer.

A couple days later, it happened. I had handed out a couple of Otter Pops on request and one of them was the ‘live round’. Our ten year-old Child A ended up with it and I tried not to be obvious as I watched him clip the end off and start eating.

After a couple seconds he stopped…. then turned and walked quickly to the garbage can. As he passed me, he muttered ‘I hate you, Dad’ and never before have those words brought such satisfaction. He started spitting into the trash then threw away the Sriracha Otter Pop. A few seconds later, he reached down, pulled it out again, and tried to casually offer his brother Child 1 a taste. “Hey, want to try?” he asked. Child 1, for once, hadn’t had his nose buried in his phone and had caught on that something was going on. He passed.

With little more than a few cents worth of Sriracha and maybe 10-15 minutes of effort I managed to teach my kids another lesson about how important it is not to trust anyone or thing. Hopefully this lesson will treat them well going forward just so long as I can keep them off those conspiracy theory websites.

But today, just today, Sriracha Otter Pop was actually an inside job.