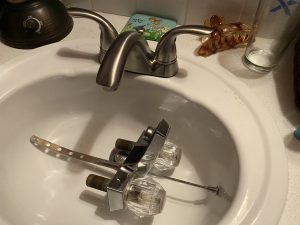 A decade ago, I decided to replace the two 1970s-style chrome-plated faucets with the plastic ‘crystal’ knobs in our bathroom (which had always puzzled me because our house was built in the late 90s) with more modern, brushed nickel ones as one does. I was replacing everything with brushed nickel. Lighting fixtures, door knobs, actual nickels… just going bonkers with 2010-era design sensible brushed nickel everything. So for our bathroom, I bought a pair of faucets at the home improvement store and swapped out the one for our main sink easy-peasy, Josh-Lyman-squeezy. Turned it on, hardly any water blasted out from the insufficiently tightened hoses and then none at all after some panicked tightening.
It was done.
Oh yeaaaah.
Having spent upwards of a half hour on the job, I was le tired and the second sink was our auxiliary sink anyways (translation: the sink that was being used as storage) so I put the box up on the counter to take care of the next day. The next day, obviously, other stuff came up. Same the day after, and eventually it just became part of the landscape. After all, the sink we actually USED was upgraded and fine.
Somewhere along the line, the box with the new faucet disappeared. I noticed a few months later when I went in to industriously finish this project, but it was gone. The Case of the Missing Faucet occupied me for a couple days but then it too passed.
…until one day about five years ago when an archeological expedition into the garage revealed an unexpected find. Well, it was unexpected to me, you the reader would only be surprised if what I found WASN’T the box with the new faucet, and that was indeed what it was. Somewhere along the line, it must have been picked up and migrated into cold storage (the kind nickname I give the giant, unordered mass of Stuff that makes up a dry artificial reef in my car hole) but now it was right there in my hands so I marched it back up to our bathroom.
…where it sat. In my further defense, I didn’t have a wrench upstairs. When I was downstairs, all memory of needing a wrench disappeared like Mandy at the end of the first season of The West Wing. When I was upstairs, I’d see the box and nod my head sagely, remembering that I’d meant to get the wrench. More than once, I literally went downstairs specifically for tools and forgot by the time I reached ground level. This probably ate another couple years.
Eventually, I ended up under the bathroom sink with a couple of different wrenches and pliers, trying (and failing) to get the big plastic sink nuts that held the old faucet in place off. I didn’t have enough leverage to get them off by hand and I couldn’t get any tools around them either.
For the next year or so, I’d occasionally pull everything out from under the sink and try again and after efforting for upwards of an entire minute or so I’d give up and go do something more immediately rewarding like watch some quality White House fictional drama or 3D model and print stuff or write some code. Or basically just about anything because climbing around under this sink for no positive outcome just wasn’t doing it for me.
Yesterday, a figurative light went on. Pulling open the new faucet box, I verified that it had the same type of plastic sink nuts as the inaccessible ones. So I took some measurements then modeled a tool to fit over it that would give me more leverage. I 3D printed one out of PETG plastic and crawled under the cabinet and was able to immediately remove the intransigent fasteners that had obviously been tightened 23 years ago by some kind of sadist.
The extra leverage was perfect, and I sat there with those nuts in my hand and a feeling of victory in my heart.
Minutes later, the ‘new’ (an asterisk may be appropriate too, I’m not sure what the right way to describe the age of an uninstalled but decade-old unopened water fixture is) faucet was installed and working. I’d shut the water off to the second sink 10 years ago in preparation but the plumbing seemed no worse for wear and everything worked perfectly on the first shot. At some point in the next couple days, I’ll no doubt towel it dry again and carefully place the temporarily relocated soaps and makeup kits and whatever other bathroom cabinet nonsense is appropriate back into our auxiliary sink so it can resume its service to the clutter gods, but by Jove, I finished that project I started all those years ago. I finished it GOOD.
Alright, what’s next?
A reddit poster asked what people didn’t notice about themselves until someone else pointed it out, and I had something.

I wonder how long mere humans will stay electable. With social media and whatever follows it, it’s hard to imagine every future candidate being presented with embarrassing pictures and opinions farmed from decades earlier.

“President Pasta-Batman version 4.23, the latest revision to the uniquely named leadership intelligence now in its second term, has signed historic legislation recognizing same sax marriages at a federal level. An avowed jazz lover itself, the program promised that musicians and their closest companions need not be denied the basic rights already available to humans, uplifted primates, and certain species of dolphin.”