“It’s funny, we’ve got fusion reactors, space warp drives, tritanium alloy impulse manifolds that can funnel the power of a hydrogen bomb through a hole the size of a number two Fisher space pen, but…” The cargomaster paused for a moment, adjusting a setting on his lift, then began elevating the crate up towards the top of the stack as they sorted the supplies for the new colony. “But we still manage to drag rats out everywhere we go.” 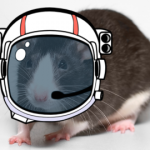 The apprentice had a skeptical look on her face. “I don’t get it, why not just space the cargo bays?”

The cargomaster laughed. “You think you’re the first person to think of that? Oh, we do. We’ve spaced cargo bays left and right, but somehow they end up making it.  People have tried poison gas, inert ones when foodstuff got contaminated.  They swept the cargo with radiation, piped high pitch noises in, everything.  I don’t know if they live in the Jeffries vents or crew quarters or what, but they keep eventually showing up in the nooks and crannies no matter where we go.”

The apprentice pursed her lips, thinking. In the lull, the two guided the crate into its slot then retracted the mover and began hovering over to the next job. Finally, she spoke again.

“Say… what if we’re NOT carrying them around?” She looked over sideways at the older man. He scratched his head, skeptical.

“I don’t get it, how else would they show up everywhere? Little rat spaceships?” He laughed then, pantomiming tiny spaceships flying around. He hurriedly grabbed the controls as the cargo mover began to drift off track, but kept chuckling.

“No, not.. no. But what if they’re, you know, seeded?” Speeding up as the idea formed in her head, she continued. “What if rats are just one of those Earth things that shows up everywhere? We still find daffodils all over the place. And think about how many planets look like Southern California? You can’t tell me that’s a coincidence. Well, what if the aliens that dropped humans all over also brought along rats?”

The cargomaster’s chuckle slowed, then stopped. They continued over to the new crate in silence and began loading it. He cleared his throat.

“You know… maybe… maybe you’re right, maybe you’re wrong, I don’t know. But I know these dang crates won’t load themselves so let’s just concentrate on getting the job done. You go ahead and take care of this one, I’ll supervise.” He handed over the control collar to her and stepped back, pulling a quick swig from a hidden flask. Space rats! Ridiculous.

A nearby bush wiggled, and a pointy nose stuck out just long enough for its owner to check out the scene for food. Nothing good over there today, but it knew to check later. It had plenty of time, and there were so many good things to eat.  The new people brought such wonderful things.