Like all parents, my wife and I are trying to clone our kids to be just like us.  Why?  Maybe we know we’re messed up but figure at least it’s a “Known level of messed up”.  So what’s our plan?  ’80s All Day, Every Day’! 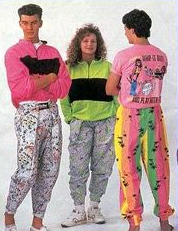 80s Music, describe Hypercolor shirts , try to make them jealous of our sweet Garbage Pail Kid cards collections…  We’ve got a plan.  They’ll like the 80s.  No, they’ll LOVE them because that’s when WE were kids.  The main way we’ll indoctrinate them into the magic of The Greatest Decade, though, is to show them all the movies WE watched.  Maybe if we really want to turn them into little clones of ourselves, it’s not 100% effective, but it’s a start, right?  It’s a plan, and it’s a plan that involves watching movies instead of having to go out and really effort, and it’s working kinda!  They cheer and clap at Back to the Future, we watch The Goonies then go to Astoria,OR to find landmarks, maybe we watch Die Hard then sit down as a family and discuss mistakes hero Hans Gruber made and how he took his eye off the prize.  Basic 80s family stuff, and our best bet at getting shared experiences.

But then…  there’s the one film they saw VERY differently than we did.  It’s a film that had me terrified and thrilled in equal measure because of the mystery and casual brutality of a hidden foe.  I’m talking, of course, about Predator.  If you haven’t seen this, it’s a heart-warming story of some buddies out on a ‘camping trip gone wrong’  that’s a metaphor for the struggles of reaching middle-age and our sense of mortali-no, I’m just kidding.  It’s an awesome gun-gore-fest where all the real action movie heroes of the 80s curse their way through a jungle in a knock-down drag-out fight against a super duper alien hunter.  The creature variously stabs, disembowels, and decapitates the cast but you don’t actually SEE it until near the very end because it’s wearing a ‘cloaking suit’.  It’s kinda like those Harry Potter books where Harry does mischief with the Cloak of Invisibility, except instead of sneaking his wand past Argus Filch to get a good Hufflepuffing, the Predator uses HIS invisibility to sneak his SPACEKNIFE into a bunch of PEOPLE.

So here’s where my kids start to see a very different movie; while you don’t SEE the Predator until the last few minutes of the movie, you HEAR it.  It makes this terrifying clicking noise that echoes through the jungle.  It’s inhuman, it’s menacing, and you hear it every time something terrifying happens to anyone.  It sounds like this:

We’re watching it and each time the monster clicks, I peek out from my blanket to see how the kids are doing and they seem…  ok with it.  In fact,  you might say they’re sanguine about it.  This is a little joke because while mainly meaning ‘optimistic in a bad situation’, it can also mean ‘blood red’.  (For the record, I DID say this was a ‘little joke’, so you have nobody to be disappointed in but yourself if you feel a little let down. Yes, you.)

So anyway, this is really confusing me because I remember being pretty scared of this critter.  Actually, I’m a little scared of it right now and I’m just sitting here in front of a computer typing.  ‘What does it look like?!’ I remember thinking.  You can only see a rough outline through the ‘cloak distortion’ and I remember my imagination going wild.  Does it have huge teeth?  Does it have some kind of crazy biting mouth?  I didn’t know!  But my kids seem pretty comfortable with the Predator, like he’s some old friend of theirs.  WHY AREN’T THEY SCARED?!

It’s a complete mystery to me until I hear one murmured comment about halfway through the movie that answers everything.  I can’t make out the whole sentence, but I heard one word clearly: “Perry”.  There’s only one ‘Perry’ that my kids know, and that’s…

If you’re not a parent or if you’re over 15, you might not know Phineas and Ferb.  It’s a Disney cartoon with some wise-cracking kids who go on mysteries and adventures and blah blah blah blah, but relevant to this post: they have a pet duckbill platypus named ‘Perry’ who is also secretly a crime-fighting super agent who never talks.  He doesn’t talk, but…  he clicks.  A lot.

And he sounds, I realize, exactly like the Predator.

(it really starts getting good around hour 4)

So when the big reveal of the Predator happens and you see his weird mouth and beady little pig eyes and space dreadlocks, the kids are startled and make appreciative noises, but it seems like it’s kinda a letdown for them because they’ve been imagining a large duckbill platypus the entire time.  Let me repeat this:

For them, Predator was a movie about a platypus that was tearing out spines and knifing people.

These have to be one of the most ridiculous animals out there (is it a bird?  Is it a mammal?  What’s the deal?) that nobody can really take seriously, so for my kids, the clicking horror that had young me at the edge of a heart-attack was just a big, goofy looking platypus with basically magic Harry Potter pants.

So I have to ask myself, could they know something about Perry I don’t?  Could…  could THIS be the big match-up we should REALLY be considering after the AvP franchise died out….?

No, that’s ridiculous, but I entertained the thought, and that’s what makes me a good parent according to this one book I think I saw once but please don’t ask for the name because it was a while ago but I’m pretty sure it’s legit advice.

So here we are.  On one hand, I’m a little sad that I couldn’t clone my exact experience onto their malleable little brains and make them more ‘Me’-like, on the other hand, people keep saying they’re going to be their own people and grow into unique individuals.  WHATEVER, but that’s what they say.

But by the gripping hand…  why’d they have to think this ultimate 80s bad-ass was THIS?!

Curse you, Perry the Platypus!