Eight Wendy’s in my area have just simultaneously closed.  There are a bunch of different theories about why ranging from disagreements between corporate and the franchisers to stories of people being horribly cut by the squared-off edges of the hamburger patties.

You want to know the REAL reason they went under? Because they stopped selling the delicious Frosty Cone.

What kind of monster DECIDES to stop selling the Frosty Cone? It was like the perfect hybrid between forbidden ice cream cones and the sensible Frosty. It was…. you remember the 1980s Mini Series V:The Final Battle? Of course you do, you probably don’t got more than a few hours at a time between thoughts about how awesome it was.

If you recall, in the award-winning prime time series one of the alien invaders seduced an earth woman.  She ends up giving birth to two things: a small, misshapen baby dinosaur creature full of hatred and a perfect looking little human-looking child with some kind of space magic bullshit. 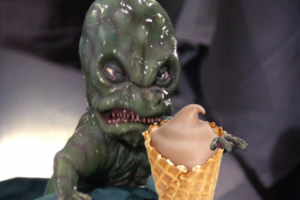 I don’t remember the science behind it, but she was like a deus ex machina kid who turned off the big space bomb at the end of the film and made everyone happy and able to visualize a future where fewer humans were being eaten by the lizard people.  With me so far?Basically, the Frosty Cone was like that kid. The perfect combination of delicious sugary bullshit and low-calorie Frosty goodness. The corporate decision to stop selling them? Pretty much dinosaur space Hitler baby.

Were these eight the only ones affected, or will there be more?  You know what to do, Wendy’s.  Bring back the Frosty Cone or Earth gets it.